Just a few weeks later, a global pandemic caused an abrupt end to her softball season and the cancellation of her school’s drama performance after hours of practice for her role.

But despite all that has been taken from her, the second grader is focused on giving back.

On May 8, Stratton Rose begged her mom, Cassy, to host a lemonade stand in their driveway. Her goal? To raise money for the front-line health care workers fighting COVID-19 at Vanderbilt Wilson County Hospital (VWCH).

“I’m part of a community-based leadership program called Leadership Wilson, and I know my daughter has heard me on my calls talking to Jay Hinesley (VWCH president) and mentioning Vanderbilt and all the good work the hospital does. I guess she’s noticing my conversations,” said Cassy, who owns Mt. Juliet Travel, LLC.

“I’ve been on calls weekly, and we’ve listened to the case numbers. Stratton Rose said she wanted to raise the money because ‘those people need help.’”

With the help of her neighbors, Mya, 12, and Layla, 9, Stratton Rose gathered supplies including a table, cups, poster boards, markers and lemonade courtesy of her mom and ventured onto the Thompsons’ driveway to begin her shift. The group sold the lemonade in half- and full-cup increments at 25 cents and 50 cents.

As with other Tennessee food and drink services, social distancing measures were in place, including a generous dose of hand sanitizer after each purchase and a no-contact method for handing the cups to customers.

After five hours of labor, the girls proudly produced a zip-lock bag of cash totaling $43, later adding an additional $50 donation from a family friend who heard about their hard work.

“They wanted to keep selling lemonade past 5 o’clock, but I told them ‘no.’ They were so upset,” said Cassy. “I was dumbfounded. I thought they’d go outside and end up riding their bikes, but they were nonstop. Their little cheeks were burnt. The money kept coming in to the point where I had to keep bringing it inside because I didn’t want it sitting out.”

After Cassy posted about the stand on social media that morning, customers came from all around, including many who didn’t live in their neighborhood.

The stand, which was Stratton Rose’s first lemonade stand, was such a success that the girls asked to host another one the following week, raising an additional $25. On May 21, they personally delivered all $118 to the hospital.

“Stratton Rose is a tremendous little girl with a very big heart. We are honored that she chose to support Vanderbilt Wilson County Hospital in this way,” said Jay Hinesley, MHA, president of VWCH. “We are extremely grateful for the outpouring of support we have received from the community and are proud to accept Stratton Rose’s generous gift.”

While Stratton Rose, Mya and Layla are proud of their hard-earned donation, no one feels more pride about their actions than their parents.

“I feel so blessed to have a daughter who shares kindness and love with other people who are in need because not everybody has that gift to want to give to others who are going through a hard time,” said Cassy.

“Stratton Rose has experienced a loss this year that most people never have to experience at her age. The tornado had a tremendous impact on our families here in Wilson County, and especially those who lost their school. Their school was a part of them. She still talks about all of her artwork that was there, she still has two books from the library, and there are many nights to this day when she will cry going to sleep,” said Cassy.

“I think she understands that things have been taken away from those who are in the hospital just as she has had things taken away from her. So, she’s saying, ‘I’m here and I’m able — what can I give back to them?’” 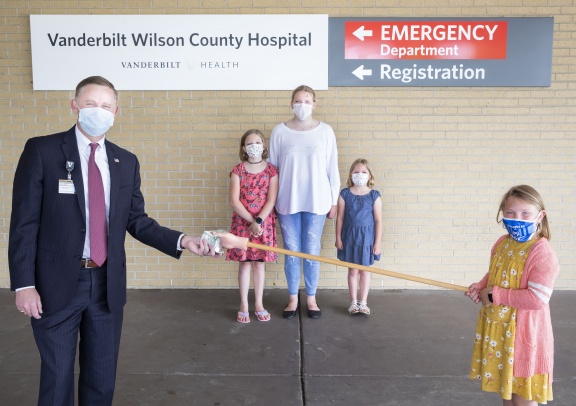 Stratton Rose Thompson, right, joined by her friends Layla (9), Mya (12) and Ella (5) Rockensock, center, show how to deliver a donation while maintaining social distance. Jay Hinesley, president of Vanderbilt Wilson County Hospital, was on hand (literally) to accept the donation of proceeds from the lemonade stand the girls ran in their Mt. Juliet neighborhood. Photo by Susan Urmy